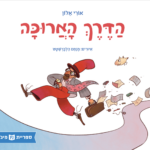 Mr. Zinger's Hat
Written by: Cary Fagan. Illustrated by: Duŝan PetriĉićI
tell myself, I am part of the people. Why shouldn’t I make up stories?…
At times I hear a little story, a spark of a story, and Ilight a fire from the spark.
(Isaac BashevisSinger, courtesy of the Bashevis Singer Foundation)
This is a quote by Jewish American writer Isaac BashevisSinger (1904–1991), who inspired this book. He loved writing stories for both adults and children, believing that stories were a source of interest and joy to his readers, and that it was up to him to create imaginary realms as well as document worlds that once were, such as the Yiddish speaking domain in which he was born and raised.
To him, children were keen readers able to spot and appreciate a good story. Mr Zinger's Hat urges each of us to acknowledge the creative power ands ource of happiness that is storytelling–and to relight the fire using the spark.Reading together, experiencing togetherDiscussionParents may want to share the stories they liked while growing up: Was there a particular story you enjoyed hearing over and over again?
Who was. your favorite protagonist? You could ask your child which stories they like. Are they fictional or true stories? Dual role illustrations When do the illustrations tell the story of Leo and Mr. Zinger, and when do they complement the story the two of them made up?
You may enjoy taking a look at the illustrations together, noticing the various styles, and thinking of ways of discerning what the illustrations refer to, and what they are telling us. The story in the hat Which stories are hidden in the hats you own? how about choosing one of your favorite hats and telling the story that is hiding in it: one player looks into the hat and starts inventing a story. After one or two sentences,they pause, and the next player picks up the story, and so on, until all players have added their part to it. Bashevis Singer could serve as a source of inspiration for telling a family story that has been passed down in your family.
A game –Who am I?
Would you like to play a game? Perhaps you would enjoy writing the names of your favorite characters from books on pieces of paper, and takingturns wearing a hat bearing the name of the character.Whoever wears the hat does not see the name written on the piece of paper attached to it, and must guess who it is using questions, such as: Is it a fictional character? Is it an animal?