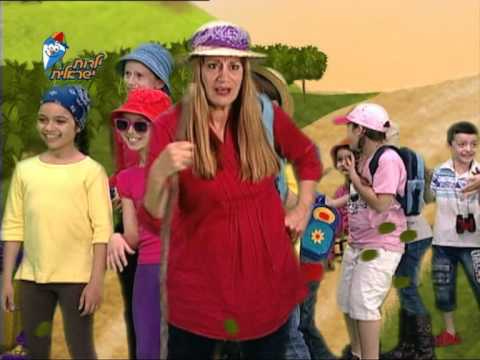 A group of preschoolers set out for a walk in nature and encounter a variety of creatures and surprises. PJ Library starts off its year with a song by Naomi Shemer that reminds us to stop and look around us, and even sing along with nature.

“Know that every blade of grass has its own special song” (Lyrics by Naomi Shemer, inspired by Rabbi Nachman of Bratislav) Naomi Shemer (see her biography, below) believed that spending time in nature, gazing at the beauty of creation and listening to the special melody sung by each blade of grass, cultivates a connection to nature and to the Land of Israel. While the walk depicted in the song may be short, the children’s experiences are big and electrifying. When we stop to gaze at the tiny wonders nature offers us, we all are amazed – just like the children.

Activities You Can Do at Home

 “Take a walk” with your children through the pages of this book. Examine the illustrations closely and find what is being described in the song. The illustrator, Liat Yaniv, added details that do not appear in the text. See if you can find them!

 The illustrations are masterpieces of glued strips of colored paper. Even very young children can make a picture by gluing strips of paper. You can tear or cut pages from old magazines and make a colorful collage out of the strips.

 The song “A Short Walk” has a simple melody with a beat that is well suited to the pace of walking. If you know the tune, you might sing the song together. You could also find other songs by Naomi Shemer and put together a little Naomi Shemer Song-Book for a family singing night.

 The song’s lyrics reflect the landscape of Naomi Shemer’s childhood, which she spent on a kibbutz by the Sea of Galilee. What does your own neighborhood look like?

 Like the children in the song, you might go on a short walk close to home. Each member of your family could take turns saying what s/he sees: “I see an ant!” “I see a bird!” Do you all notice the same things?

 Going for a walk together offers a wonderful opportunity for conversation. You might ask your children what excites and what amazes them, and then share your own thoughts and feelings with them.

 After your walk is over, you might sketch the route from your house to the children’s kindergarten, and then add illustrations showing the plants and creatures that you met along the way.

Naomi Shemer was born on Kvutzat Kinneret, a kibbutz by the Sea of Galilee, in 1930. Her songs have been an integral part of life in Israel for decades. Many of them describe the land—its landscapes and its daily life—while others have served as the soundtrack for major and powerful events in Israel’s history.

When she was young, Naomi taught music and rhythm to the kindergarteners at her kibbutz, and her song “Let’s Go to the Field” was inspired by the walks she took with the children.

Naomi Shemer was a very prolific poet and songwriter, and dozens of her songs are familiar and beloved by children and adults alike. Among her most famous songs: “Jerusalem of Gold,” “Aleph Bet,” “Good People,” “Everything’s Open,” and “Lu Yehi” (Let It Be).

In 1983, she was awarded the Israel Prize for Hebrew Song. Naomi Shemer died in 2004 and was laid to rest in the Kvutzat Kinneret cemetery.

The original version of the song contained this verse: “Each child picked a thousand cyclamens (wildflowers).” Fifty years ago, when this song was written, Israelis weren’t aware of the need to protect their country’s wildflowers, and kindergarteners did indeed pick a lot of them. After laws were passed protecting the wildflowers, Naomi Shemer changed the word “picked” to “counted.”

You can share this with your children and help boost their awareness of the rule when they’re out in the natural world: “Take nothing but pictures, leave nothing but footprints.”